Doing My Part to Build a Better World

I have been at Davidson for over three years now and have been a part of numerous programs, events, clubs, and organizations that have worked to foster diversity and inclusivity. As a minority on campus with salient identities of POC, immigrant, Muslim, and low-socioeconomic status (among others), I’ve become hyper-aware and felt the impact of microaggressions as they pertain to my identities. While I have not felt particularly threatened, since I am a confident male, cisgender, abled individual, I have felt alienated at times and questioned my place here at Davidson. However, I think everyone at some point or another has felt that way, here or anywhere. I do want to mention the strong sense of belongingness I have felt despite any sense of alienation. I’ve come to find several groups that have made me feel welcome here and part of that could be due to the beloved Honor Code, part of that could be the inherent community of a small school, and part of that could be the extent and impact of quality education that highly correlates with tolerance and cooperation. Whatever it may be, I’ve worked to promote a community of diversity and inclusion here and believe I can be of service to those who need it, which is a key factor in my decision to be in a position of leadership on campus. 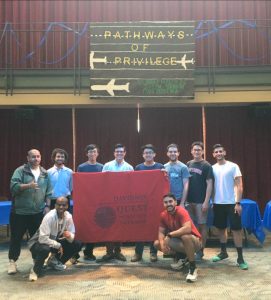 I think a bit of my own background would help in explaining my involvements in diversity and inclusivity initiatives at Davidson and other places since beginning college. I was born in Karachi, Pakistan, but grew up in Wichita, Kansas. I went to public schools and was around people of various racial, ethnic, religious, and political backgrounds. I know it can seem hard to believe that I’d experience this in Kansas of all places but hear me out on this. I gained valuable experience by interacting and becoming knowledgeable on the cultural differences and similarities from my school and local environments. My immediate friend group (that I’m still close to) consisted of Nigerian, Vietnamese, Mexican, Iranian, and American White backgrounds and they were also Christian, Atheist, Agnostic, and Jewish. Despite our several differences, we remain a close-knit group. I want to be able to see these types of friendships more often because I believe it is important to keep ties with people you differ from to keep from remaining in echo chambers and segregated environments. There tend to be levels of disagreement and arguments in diverse groups since there are more perspectives; this is necessary for awareness and cooperation in a diverse world. I was able to take much of what I learned from my high school friend group and apply it to conversations and interactions I’ve had at Davidson. I am a part of the Questbridge Scholars Network which assists low-income students afford an elite college education. My fellow scholars were of a low socioeconomic background but also from various parts of the country and of other diverse identities. I knew this group first. I was a part of the S.T.R.I.D.E. program which introduced me to several other racial minorities. Even my first-year hall consisted of different racial, religious, and other diverse backgrounds! I found these groups to be incredibly helpful as I had never visited campus or this side of the country before; most things were new to me and the comfort I felt with such people was reassuring. My background was a key part of continuing to be involved with those of intersectional identities and how I found community and friendship here. 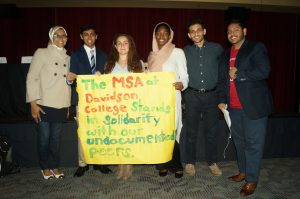 My first experience with the term “microaggression” was my first year during a Posse-Plus retreat in February 2016. The retreat takes place in Black Mountain at a YMCA club where Posse Scholars invite several staff, faculty, and students to join in a weekend where a national topic is discussed with others in close-knit community. The theme for this year’s retreat was: “Sticks and Stones: Language and Speech in a Diverse Society.” I learned here what a microaggression was and put a name to a phenomenon I knew existed. The small, quick quips or looks people made if they found out my first name, Osama, or religious identity, Muslim, or even home state, Kansas, would be enough to create discomfort. I also recognized I was guilty of microaggressions from time to time; I do believe there would have to be some master-level sense of awareness for anyone to ever not perpetuate a microaggression, if at all possible. As people, our biases and presumptions come out without us realizing them. However, I do think we can continue to lessen our microaggressive acts as we increase our levels of conscientiousness and our willingness to learn about the lives of others to create more cooperative communities moving forward.

As people, our biases and presumptions come out without us realizing them. However, I do think we can continue to lessen our microaggressive acts as we increase our levels of conscientiousness and our willingness to learn about the lives of others to create more cooperative communities moving forward.

As I became more involved with larger, campus-wide organizations, such as SGA, and conversed with administrative staff and students, I became more aware of incentives to increase diversity and inclusion. To clarify, I don’t think diversity and inclusion are goals that can be met once. Diversity implies multiple identities from multiple people in multiple environments and inclusion is dependent upon recognition of these identities to understand how they are the way they are and how individuals interact with each other. I admired the level of attention on students on campus to make them feel comfortable. This attention has manifested itself in many ways, such as Common Ground (a coalition of multicultural organizations), S.T.R.I.D.E., the Lavender Lounge, the Director of Diversity and Inclusion, the Commission on Race and Slavery, and FIRST (Fostering Inclusivity and Respect in Science Together), just to name a few. As I acquire positions of influence, I find it necessary and beneficial to interact with as many individuals and groups as possible to best serve where I can. As student body vice president, I need to be aware of concerns students have and how to best resolve them. As a resource to my fellow students, I’m proud to be helpful in this regard. 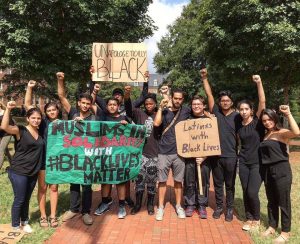 In fact, it is due to my involvement in the aforementioned interactions and programs have resulted in my cultivating a strong interest in teaching. I’ve always enjoyed telling others about the things I know. I’ve enjoyed the satisfactory feeling when someone has understood something I’ve explained. Most, if not all, people probably feel that way but I have felt enamored when I’ve done it, especially on a larger scale. There have been several occasions where I have mentored and tutored other students and felt great while doing so. The most rewarding experience I had was when I spent a couple of months teaching refugees at the International Rescue Committee (IRC) while at home in Wichita. Most of the refugees are from African countries. My family owns a restaurant and hires a few people from IRC occasionally and I figured it’d be a good opportunity for me to work with refugees in a new setting. I taught basic English grammar and American culture such as how to interact with a waiter and order food at a restaurant. It was not the ideal setting but given that there aren’t too many professional interpreters for the variety of native languages the refugees spoke, I was able to work with those who were more fluent in English to assist those who needed it most. By the end of the two months, I became the favorite most favored instructor due to how comfortable I was able to make the students feel. Though I can’t say for sure how well I actually taught the language, I know I was able to make these people feel better about being in an entirely new place where everything seems alien to them. I don’t think I could’ve been able to do that had I not had the experiences I had working with diverse groups. 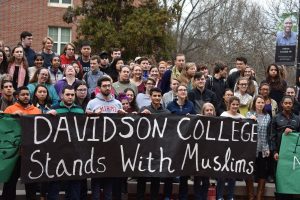 The evident conclusion I am drawing is that diversity, inclusion, community, and related terms are crucial to our world. I’ve spent my entire life thus far working to promote these values. I want to reiterate that these values require constant efforts to enact and maintain; there is always a way to make someone more comfortable and for more people to feel more comfortable. Tolerance is a minimum expectation that should imply building towards promoting a society that invites people rather than pushes them away. For some, there is a loss of culture and identity when these ideals are pushed for but I believe and know identities are malleable and constantly evolving. There are going to be cultural changes despite what any person does to stop this process of evolving diversification. I think it’s important to hold on to long-lasting identities because they do show how we change over time but at the end of the day, we change through the course of our own lives, so to expect entire populations to not do so is an absurd and ignorant way to think. I hope as people become more knowledgeable on these topics of diversity and inclusion, there is implementation of them as well. I’m looking forward to continuing to do my part in building spaces of inclusivity and teaching others why it’s so important!